Moving on from Corporal Punishment in the Baltic Sea Region

NON-VIOLENT CHILDHOODS: Moving on from Corporal Punishment in the Baltic Sea Region

The CBSS Expert Group on Children at Risk has launched NON-VIOLENT CHILDHOODS, a project providing sustainable models of integrated public education to accelerate the end of violent punishment of children.

Children are right-holders. Corporal punishment is a violation of their rights in respect to their dignity, physical integrity and equal protection under the law. A growing number of countries around the world have legally banned corporal punishment of children in all settings, yet establishing the legal ban is an important – but not the only – necessary step towards ending violence against children. Even in countries with a legal ban, many children still experience violence in the home or at the hands of their educators or carers – an experience that harms their physical and mental health in the short and long term.

The Baltic Sea Region may soon become a no-corporal-punishment zone within Europe and has accumulated important experiences in bringing the ban from law into practice. In the example of Sweden, the Parliament voted in favour of a complete ban on corporal punishment, including in the home, in 1979. Combined with integrated public education, 92% of parents now believe it is wrong to beat or slap a child, and about 3% of parents report having had struck their child in 2011 compared to 28% in 1980. To date, 10 out of the 11 Baltic Sea Region countries have banned corporal punishment: Finland achieved prohibition in 1983, Denmark in 1997, Estonia in 2015, Germany in 2000, Iceland in 2003, Latvia in 1998, Lithuania in 2017, Norway in 1987 and Poland in 2010.

NON-VIOLENT CHILDHOODS promotes the elimination of corporal punishment and other cruel or degrading punishments of children though the changing of the mind-set and public opinion at large. The initiative will share, discuss and systemize the experiences in the Baltic Sea Region countries in transforming traditional attitudes with a wide range of target groups such as families, children and communities; policy makers, public officials and independent institutions; researchers; as well as with the media and faith-based organisations.

Drawing on good practices, notably Finland and Sweden as pioneers of the ban, the project wants to strengthen capacity, knowledge and exchange between governments and relevant stakeholders by providing them with sustainable models of integrated public education and existing initiatives, programmes and information material. Laws, campaigns and programmes already existing in the Baltic Sea Region and beyond will also be mapped. Consultations with ministries, parliamentarians, ombudsmen, NGOs, academia and other related stakeholder groups are planned.

The outcomes of the mapping and consultations will contribute to the development of a comprehensive plan for sustained governmental and multi-stakeholder action to move from the prohibition towards the elimination of corporal punishment of children. The outcomes will also lead to guidance and targeted national-level trainings for key groups and topics, such as good parenting programmes or successful awareness-raising campaigns.

Investing in childhoods without violence is not only an investment in the future of every child and its evolving capacities, skills and resources but also in the future of more safe and secure region.

In the long-term, the project’s goal is to significantly reduce the use of corporal punishment in the Baltic Sea Region and encourage other countries in Europe and beyond to ban all corporal punishment of children or to fully implement an already existing ban.

NON-VIOLENT CHILDHOODS is managed by the Council of Baltic Sea States Secretariat (Children at Risk Unit) and the Global Initiative to End All Corporal Punishment of Children in partnership with Ministries of Estonia, Finland, Sweden and Latvia and the Ombudsman for Children’s Rights in Poland. The project was developed in consultation with Ministries across the Baltic Sea Region and with input from other experts and organisations and agencies – campaigning for children’s rights and non-violent discipline in all kinds of services for families and children. The activities and goals are grounded in the UN Convention on the Rights of the Child and are in line with the efforts to address the United Nations Sustainable Development Goal Number 16: ending abuse, exploitation, trafficking and all forms of violence against and torture of children. Eliminating corporal punishment is a key preventative action in fighting all forms of violence against children.

Photos from the project launch meeting 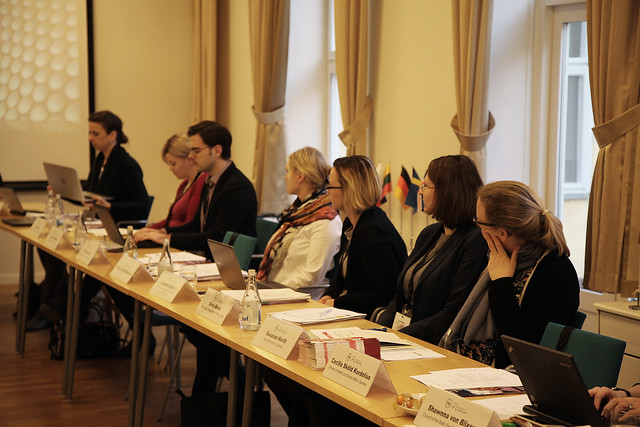 Presentation of the Mapping Study

Presentation from the Norwegian Ombudsman for Children

Presentation from the Global Initiative

Presentation from Save the Children Sweden

Presentation from the Estonian Ministry of Social Affairs

This project is co-financed by the European Union.